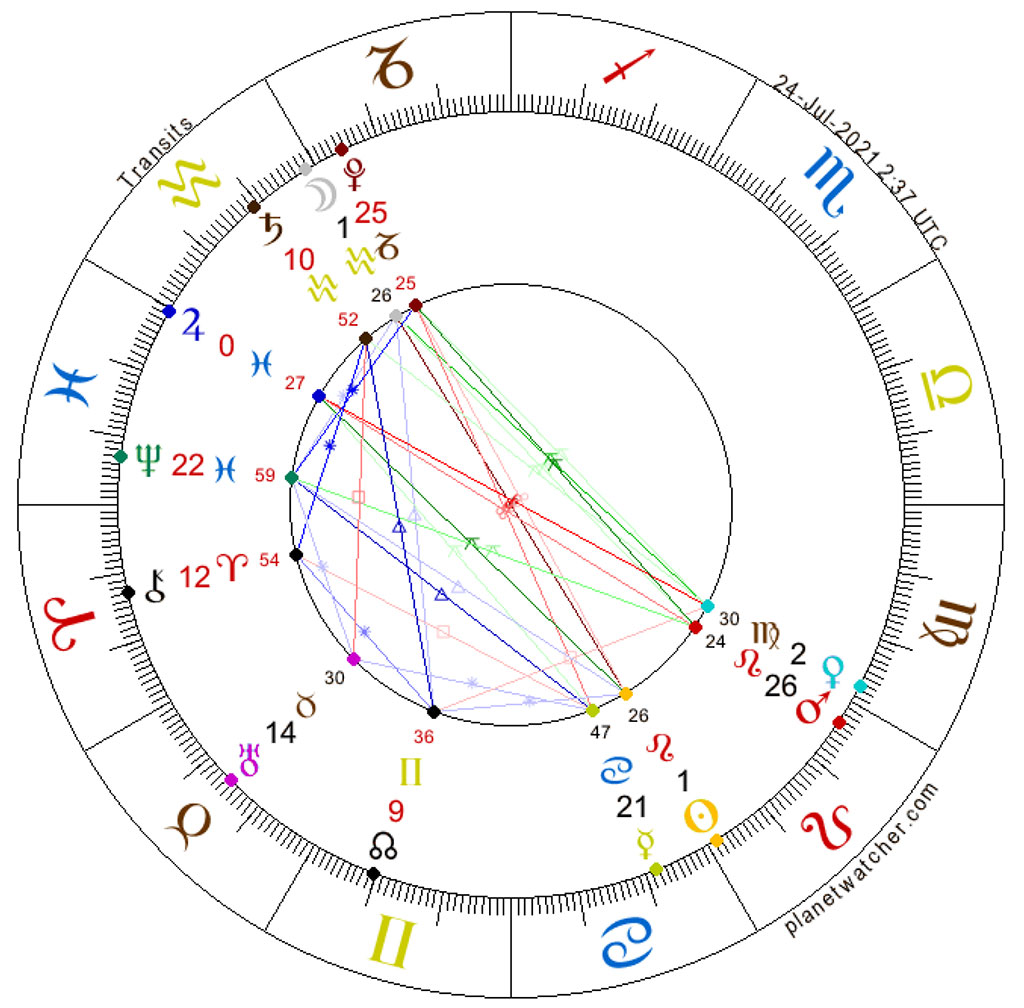 The Full Moon chart is characterized by a very awkward, and capricious aspect pattern consisting of two quincunxes joined by two oppositions and two semi-sextiles. The energies are incompatible, which means they can go off at any end, at any time, or fluctuate wildly, swinging from one extreme to the other. All players are trying to get the upper hand and neither is inclined to budge. And yet, some solution must be found.     The Sun and Moon oppose each other as soon as they enter Leo and Aquarius, respectively, which engages them in a confounding aspect pattern.   The Sun casts a semi-sextile to Venus who has just entered Virgo and a quincunx to retrograde Jupiter in Pisces. Jupiter is just about to slip back into Aquarius from the back-end, but opposes Venus before leaving Pisces. The drive for personal freedom and the desire to engage with others is almost overwhelming – yet there is also a cautionary principle at play. Retrograde Jupiter suggests a hands-off approach. But that flies in the face of legitimate worries and health concerns. Unequal rights may be offered as a solution – but that is unlikely to fly and bound to backfire. There is a sense of being stuck in a cul-de-sac. Diverse interests are at odds and cannot be brought together under one hat.

The Moon is conjunct Pluto, although the two are in different signs (dissociated), and a few degrees apart. Pluto has been transforming the way we perceive the structures and institutions of society. No longer firm and dependable, today the bedrock of society, the trust in its institutions, has been undermined in numerous ways. The Moon in Aquarius signifies both, an undaunted belief in technological solutions, and the ethical dilemma concerning individual rights versus data control in the name of security. In an ideologically divisive world, there are no easy answers to such questions.

The Moon also throws one of those awkward quincunxes at Venus. In Aquarius, the Moon advocates for liberty and humanitarian principles. Adopting a global perspective, it generalizes and philosophizes while keeping the emotional impact of real-life stories at arm’s length. In Aquarius, the Moon would rather trust technology and throw all caution to the wind – if it wasn’t for the critics, who point out that now the Titanic is half sunk, it is not good enough that only some passengers have made it onto the life-boats. We can’t just abandon the rest.

Venus and Mars are still conjunct, but, like the Moon and Pluto, they are in different signs. While Mars’ fire is burning with Leonine ardour, Venus has moved on into Virgo, a much more sceptical and picky sign. For those engaged with creative projects, this can actually be quite a useful constellation. Mars (supported by the Sun in the same sign) has a lot of creative energy and is eager to just let rip. Venus in Virgo makes a great ‘editor’ and can pull and polish the creative work into shape until everything is just right. However, don’t let her lose too early, or she may kill the fire before it even catches. Critical or snippy comments at an early stage of a creative endeavour are like throwing a bucket of cold water onto the creative flame.

Keep the big picture in mind while focusing on the creative process without losing track of the organizational details, but don’t let these two get into each other’s way.  In the social sphere, Venus opposite Jupiter can signify tremendous joy, but they can also take things a little too far, endangering all the progress made so far. Balance is called for, but hard to achieve.

On the mundane level, these aspects reflect the recent spyware scandal. Now that it has been exposed, it is time to have that conversation about the benefits and dangers of surveillance. Who can be trusted to control such operations and data? And, who is posing a threat and to whom? Where are the limits of undercover defence?   On a more personal level, Mercury opposite Pluto could expose a personal issue of betrayal and the need to have that conversation about love and trust. It could also signify mining the depth of the soul for inspiration.

Saturn’s closest aspect is the trine to the north node, highlighting the social dimension once more. The challenge is to find an acceptable compromise to safeguards individual rights and freedoms while also protecting society as a whole.

The sextile between Saturn and Chiron suggests a solution – consider public health as a social good and take appropriate measures to protect it.

The square between Saturn and Uranus is currently weak, but that does not mean its expression is. There are numerous protests and turmoil around the world that act out this square, and that won’t change any time soon. ​