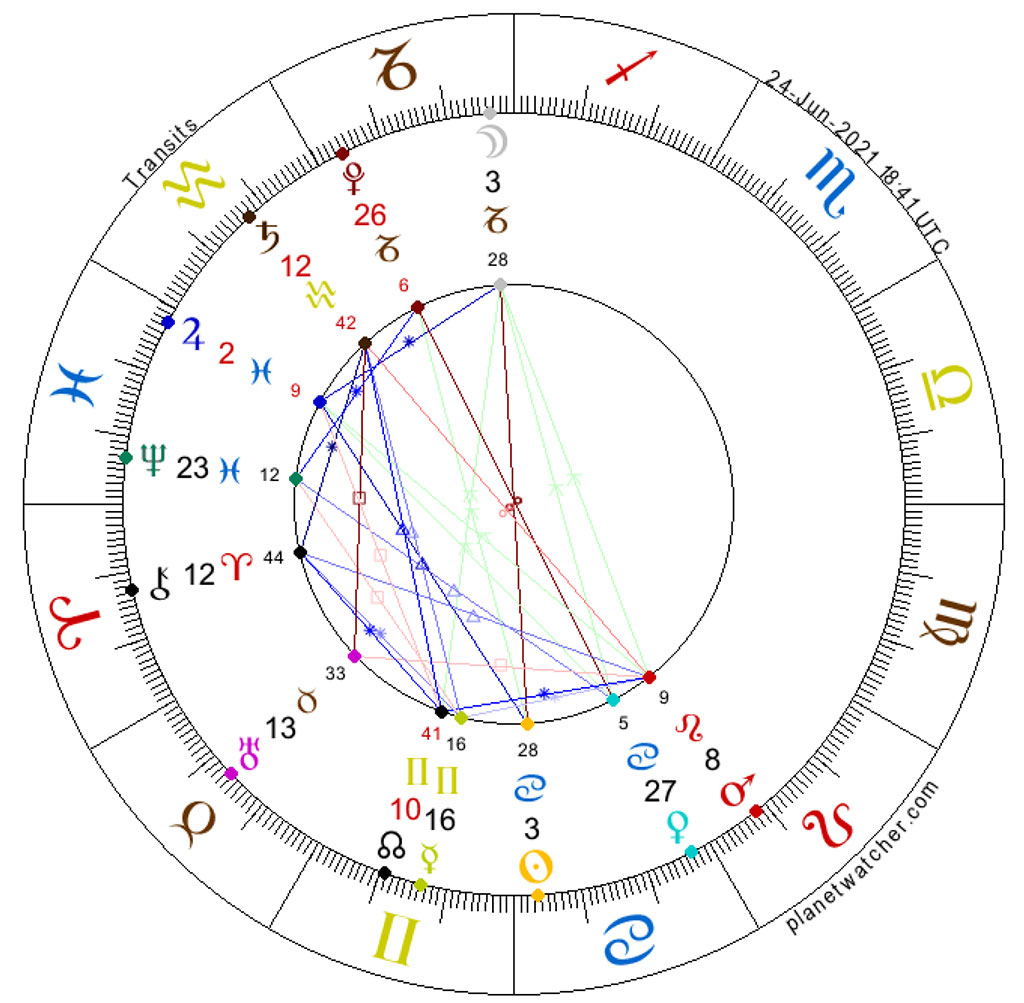 The Full Moon in Capricorn is quite a mixed bag. There are a lot of ‘positives’ or what astrologers consider ‘easy’ aspects. But there are also some challenging ones, and they are potent.

On the Summer Solstice, just a few days ago, the Sun reached its zenith and entered the sign of Cancer. The energy is now beginning to turn. Although the heat of summer is still to come, the Sun is slowly beginning its decline. But for a brief period, we can enjoy this peak moment and celebrate that things appear to be looking up, for now. But the Moon in Capricorn is pragmatic. Make the most of this joyous time, but don’t let down your guard.

Jupiter, now retrograde, is at 2° Pisces and casting a sextile to the Moon and a trine to the Sun. This offers some hope and cautious optimism – although subdued. It is a reminder to look inward and to reflect on the lessons of the past year. Mindfulness and compassion in action are the keys.

Mercury just turned direct. Still in Gemini, he is conjunct the north node (a little wide), and trining retrograde Saturn in Aquarius. Both, Saturn and Mercury/North Node are casting sextiles to Chiron in Aries. Again, the focus is on health matters. But, it seems to suggest that this is not ‘fixed’ by simply treating the symptoms. We need to address structural change to fix the underlying issues, and we must be willing to face the truth and take responsibility. During this period, revelations are likely to surface. Are there going to be consequences, or will they simply be brushed aside?

This is the most challenging aspect of the whole chart – a T-square. Mars opposes retrograde Saturn, and both are squaring Uranus. This is a very bristly configuration. All three planets are pulling in different directions and patience is nowhere to be seen. This is a conflict between the drive for personal freedom and the cautionary principle in the interest of society as a whole. It is a conflict between solidarity and individuality. The valve is Uranus in Taurus, and by its very nature, it is likely to blow.

The other striking opposition is between Pluto and Venus. This is raw, powerful, intensely emotional stuff. Some people may experience it as a passionate sexual attraction, but it is a dangerous game of power and control. Neptune is involved as well – he trines Venus, sextiles Pluto and reeks of scandal.