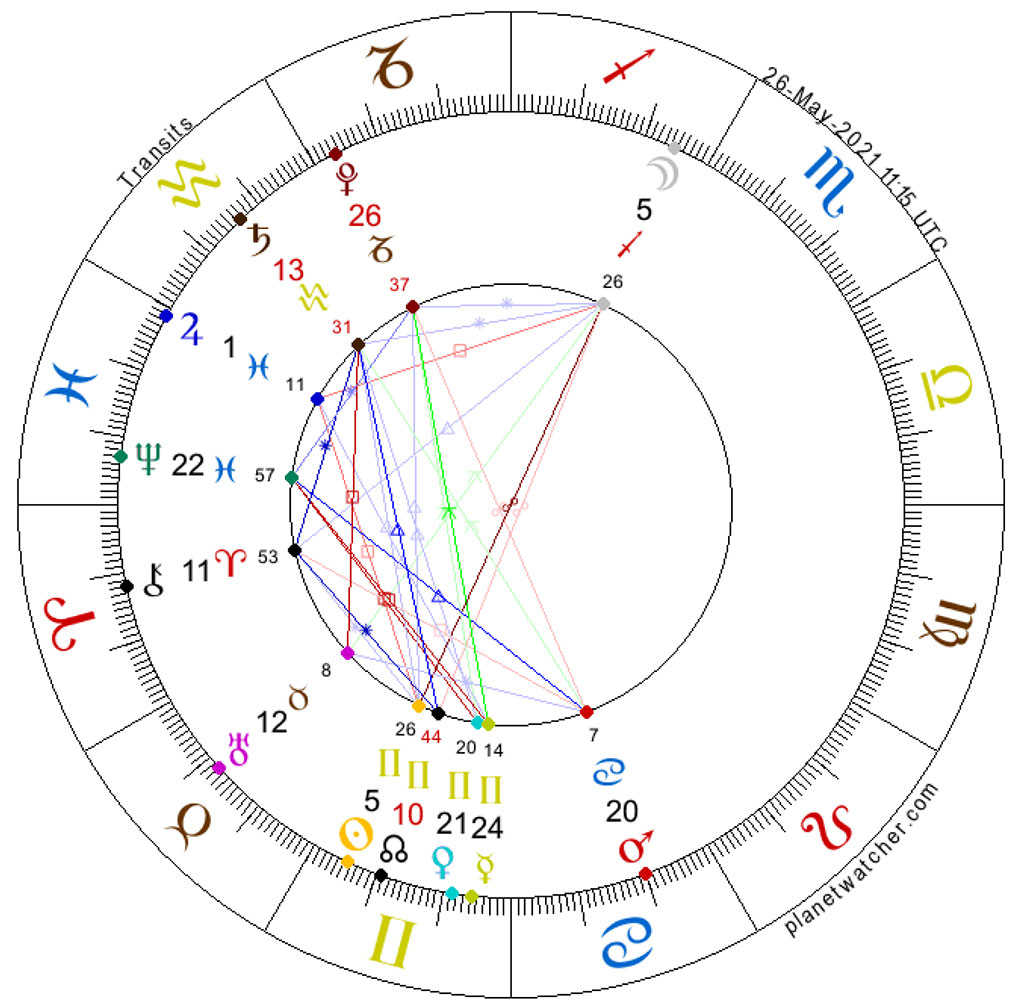 This Full Moon in Sagittarius will loom large as it rises above the horizon. It is the second of only two Supermoons that will take place this year (the first one was in April). This Supermoon is also an eclipse, which will give it an eery reddish hue – hence it is known as a Blood Moon.

If the Full Moon or nodal axis (eclipse) falls on a significant point in a natal horoscope, the person will experience it as personally significant.

Sun/Moon on the nodal axis

The Full Moon in Sagittarius is restless. Everybody is chomping at their bits, yearning to revive their life – and especially, their social life. Enough of the restrictions and confinement of recent months! Who doesn’t want to move on and put it all behind them? It has been an incredibly long winter which still gives way to spring on the odd occasion. So what is the hitch?

Astrologically, it looks like we are slowly turning the corner. The last Chiron/Uranus semi-sextile, which has been a prominent feature at key points throughout the pandemic, has made its final exact contact on May 3. However, they have not moved even as much as one degree apart and will remain in this aspect pattern until the end of June. What’s more, Mercury will go retrograde at the end of May. We will need to practice patience for a little while longer. But, with any luck, things will ease up by the end of June, or the beginning of July.

Traditionally, eclipses are interpreted as being ‘treacherous’ – ominous signs of the heavens, a warning, or a crisis. But ‘crisis’ simply means a ‘turning point’. It is more like lancing a boil – we can’t ignore it any longer. Instead, we must make a move and choose our destiny.
Eclipses pivotal moments with a social dimension, for better or for worse. The stars don’t inflict fate – we choose it by our actions and behaviours. All actions – even non-action, have consequences.

The Full Moon forms a square with Jupiter in Pisces. There are a lot of challenges, plans, hopes, ideas for the future, but where to start? And can it all be done? Too much confidence can be just as harmful as a lack of it. Yes to hope! But don’t try to run before you can walk.

Saturn has gone retrograde. It will labour over some of the ground we have covered already. But at this point, it is no longer enough to just take note and leave it at that. It is time to act.

Venus and Mercury are closely conjunct in Gemini. It is almost possible to hear them scream, ‘let’s party!’ Who would not want to heed their call? It is tempting to throw caution to the wind. To meet up with friends and family and to revive social bonds. It also suggests a feeling of restlessness and impatience. These two planets together are a signature of artistic inspiration.

Alas, Venus and Mercury are also forming a square to Neptune. This aspect can muddy things a bit. Neptune may fire up the imagination, but it needs a more level-headed and practical influence to carry it off.

Neptune can be deceptive, peddling in misinformation and lies. Don’t be fooled by sweet little lies. If something sounds too good to be true, it probably is.

The Saturn/ Uranus conjunction, the dominant aspect pattern of the year, is entering another hot phase. Their second exact conjunction takes place on June 14. Repression and freedom are the big themes, but all kinds of social issues are sizzling just beneath the surface, ready to erupt. Be prepared for sudden disruptions.