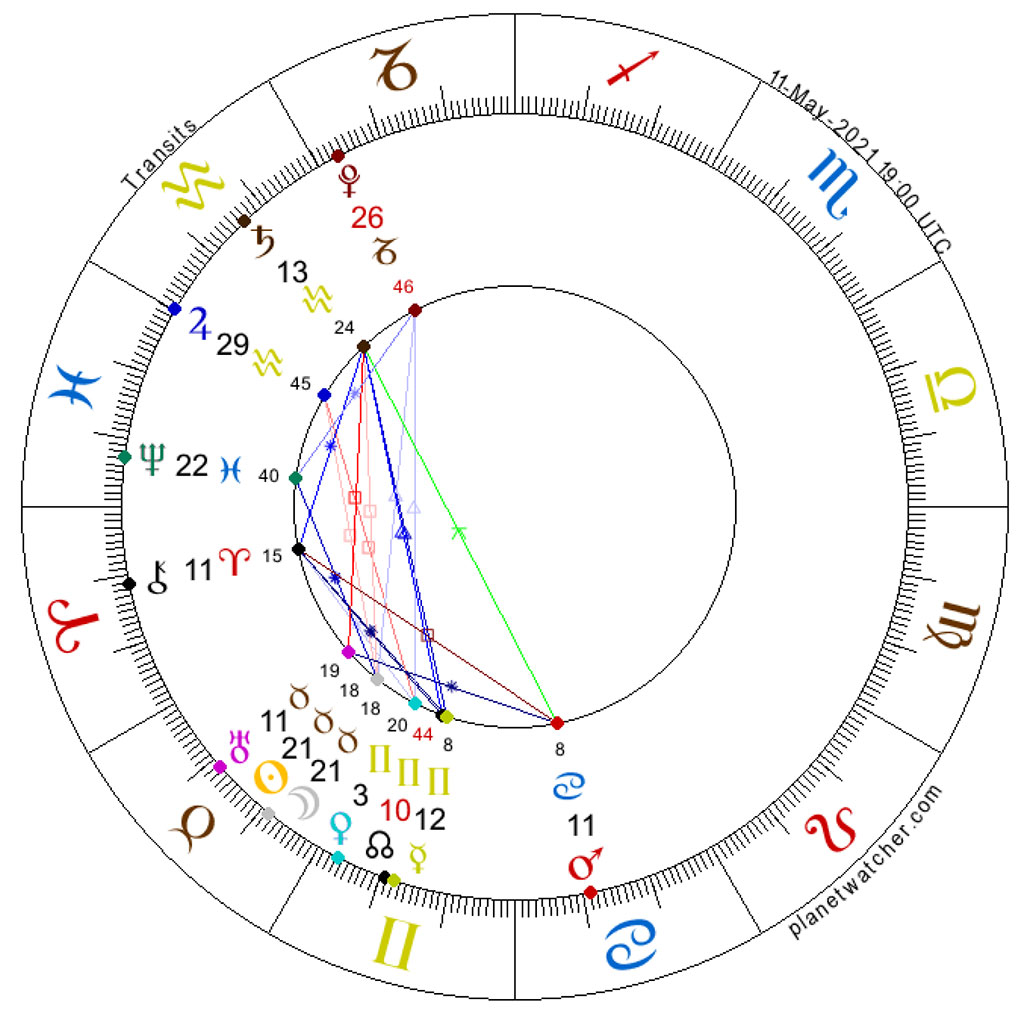 Taurus is an earth sign and the New Moon here is all about our physical, sensory needs and wants – physical love, nourishment and security. Earth, in all its facets, becomes the focus of attention. But that does not just mean self-indulgence, per se. Taurus also has a very tenacious and single-track work focus – once it has grabbed hold of something it does not change track or let go.

Holding on has positive and negative facets. Security, stability and reliability are desirable qualities, but they often come with an underlying sense of fear – the fear of loss. What is enough? What is too much? Does fulfilling our personal needs come at a cost for others?

Sharing is caring, but for Taurus, whose existential security is rooted in its physical property (including the body) there can be a sense of anxiety that comes across as greed. These issues are highlighted in this New Moon chart as the Sun/Moon conjunction is very close to Lilith, the Dark Moon.

Lilith signifies a pain point or a point of shame. In global terms, it reminds us of the collective guilt feel over our history of over-indulgence, treating the planet’s resources as infinite. Greed has engendered the issues that now present loom large a result – massive inequality that threatens our common heritage, the planet’s natural abundance.

Lilith and the New Moon are sextiling Neptune in Pisces which signifies our collective consciousness and essential unity. It is also a signature of the invisible virus that has eroded our social fabric in so many ways.  We can’t sit back, smug and self-content, and just go back to business as usual. No one is safe until everyone is safe. This aspect reminds us that we must care for others as we do for our own concerns. Unless urgently addressed, social inequality will only further erode our sense of security.

Mercury, the messenger, is in his own sign of Gemini and closely conjunct to the North Node. The nodal axis pinpoints social themes. Gemini indicates that communication and networking is key to developing workable solutions. Mercury and the North Node are at the midpoint between Mars and Uranus. These disruptive planets can be rather rash and impulsive, especially when pushed. Mercury and the North Node form a beacon of reason. Keeping all sides and the big picture in mind helps us to make rational decisions, independent of emotional trigger points.

Mercury is casting a trine to Saturn, suggesting a rational and pragmatic approach to problem-solving. Saturn is in Aquarius, an Air sign, which indicates a sense of social responsibility, even though it can be dogmatic and inflexible at times. The trine to Mercury and the North Node tempers Saturn’s rigidity with a dash of Gemini’s flexibility. We can’t solve problems at the same level at which they have been created. We need to try new approaches, but without reinventing the wheel.

Mars, Uranus, Chiron, Mercury, the North Node and Saturn are all between 11°-13° degrees of their respective signs. That means they are entangled in a complex pattern of relationships that can’t be considered individually.

Once again, the topics of personal freedom versus social responsibility serve as trigger points – and Mars and Uranus are easily triggered. They respond emotionally and physically, which makes Mercury at their midpoint the beacon of reason, and the one who is responsible for defusing this cocktail of volatile energies.

Chiron just completed the final exact semi-sextile with Uranus of this current series. This aspect has been prominent at key times of the pandemic. With a bit of luck, we should see conditions improve significantly over the next couple of months or so, as the two planets are beginning to separate. But right now they are still quite close together. We are not out of the water yet…but there is a light at the end of the tunnel (at least that is what astrology suggests).

Saturn is now 2° away from the exact square with Uranus, the most intense aspect that accompanies us throughout the entire year. It suggests almost constant turbulence of social discontent and revolutionary energy that erupts in different locations for as long as this aspect pattern is active. There is a lot of penned up frustration and demand for real change. The more this surge is suppressed the stronger it will grow.