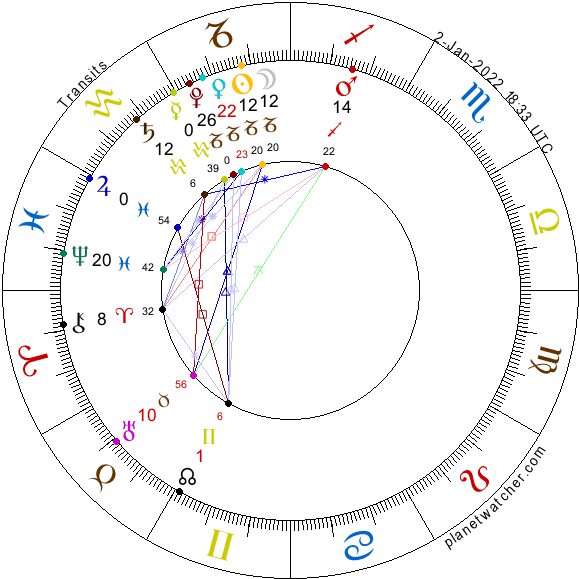 The year begins with the New Moon in Capricorn, perfect for planning the year ahead. There is no better time to set your goals and intention – along with some mechanism to track your progress.

The semi-sextile between the Sun/Moon and Saturn reflects the intentions set at this time, but they need to be nurtured. Semi-sextile are weak. They show latent potential as resources that have been stored deep within the recesses of the psyche and can be activated now. Visualize the future as vividly as you can and capture the image. Write it down so that you can remind yourself later.

With the New Moon trining Uranus, there could be an unexpected boon. It certainly adds upbeat and dynamic energy to the intentions that have been set. Get ready for change!

Mercury and Jupiter are changing signs, forming a semi-sextile in the process. Jupiter co-rules Pisces, revealing a more idealistic and compassionate side. This is well-balanced by the humanitarian spirit of Mercury in Aquarius. This charismatic aspect appeals to our humanity.

Since their second conjunction on Christmas Day, retrograde Venus has put a little distance between herself and Pluto. But she is still in orb, and Pluto’s vibes still affect her. The intensity of this conjunction is profound, especially for those most affected (by direct personal transit) to examine their feelings, honestly. Sometimes, love means letting go. Obsessive jealousy, manipulation, and control could take centre stage if the deeper changes that are taking place are not being acknowledged.

The Pluto/Venus aspect is tempered by the sextile between Venus and Neptune. Compassion and empathy will help us get through. But don’t just fudge the issue.

The final square between Saturn and Uranus is now beginning to separate but continue to reverberate throughout 2022, as they won’t completely clear the space between them until December 2022. Most obviously, it manifests as the imposition of rules, the clamping down on rights and rights groups, and the fight against political opponents, along with the response in the form of uprisings. Currently, Mars in Sagittarius, with his swift and decisive action, favours the restraining hand of Saturn.

The semi-sextile between Uranus and Chiron will continue to accompany us through 2022. Despite everybody being sick of it, the issue is not entirely off the table, although later this year things will ease up for a bit, before getting tighter again in October.