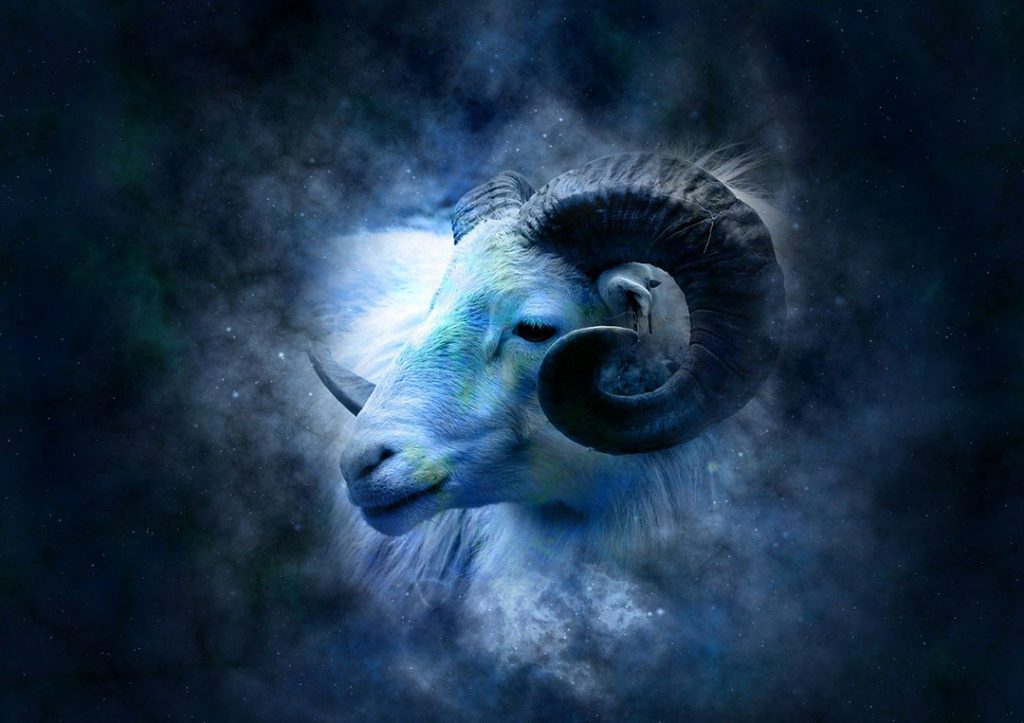 Aries is the first sign of the natural zodiac and marks the Spring Equinox. The forces of light and darkness are in balance, but the young Sun is gaining strength every day. This is a youthful, virile, potent, active sign, not quite yet fully aware of its own power, which is why it sometimes oversteps the mark. The sign of Aries comes at a time of the year when nature awakens from its winter slumber. Fresh, young, tender growth shoots and leaves are timidly braving the elements. It is a time of hope, optimism, and intrepidness before youthful innocence gives way to the disillusioned hindsight of experience.  As such, the sign of Aries stands for all new beginnings, and the determination it takes to realize one’s calling. Its symbol is the headstrong ram.

Historically, rams played a very important role in the religious life of our ancestors. They were used as sacrificial animals. Now, from a modern perspective that seems like a pretty rotten lot in life. But to the ancients, their sacrificial beasts had a higher value than gold.

A sacrifice represents an act of honoring and worshipping the Gods. Originally, human sacrifice was practiced and the firstborn was given to the gods. But in time, the practice was altered and instead of the infant, the next most valuable thing in one’s possession was offered. Most frequently that was would have been a powerful ram or bull.

Aries is a natural warrior. He is always ready for a fight – preferably one that lets him shine and lets him stand out as a hero. He is full of fire and ready to come to your rescue, whether you asked for it or not. He is gallant, incorrigible and determined to get his way.

However, he can also be impulsive, and quick to act, without stopping to think things through.

What he sometimes fails to appreciate or even notice, is the fact that others may have plans and ideas of their own.

Despite his headstrong and passionate nature, he has an egg-shell ego. When told off or rejected, his pride is likely to crumble.

More than most of the other signs, Aries needs a myth to live by. A myth gives meaning to his life’s battles.

The most famous Aries myth is the story of Jason and the Argonauts. The story actually begins much earlier, long before Jason assembled his brave men and set off on his adventure. It started with the twins Phrixus and Helle, the children of the King Athamas of Boeotia and the half-nymph Nephele.

Unfortunately, their stepmother, Ino, who hated them, plotted to get them killed. But somehow, Hermes got wind of the ill-conceived plan. He made a bold plan and sent a sacred ram to rescue the children.

The ram duly went to fetch the children and took to the sky! He flew to Colchis at break-neck speed. He raced so fast that poor Helle could not hold on tight enough. She fell off the ram’s back and into the waters below. The narrow strait in which she fell was later named Hellespont in her memory. But today it is now known as the Dardanelles.

Phrixus, however, reached Colchis and King Aeetes was good enough to take him in. As a gesture of gratitude, Phrixus sacrificed the ram and gave King Aeetes his Golden Fleece. He accepted the gift and kept it in the cave of Ares, where it was protected by the watchful eyes of an unsleeping dragon.

Quite an adventure, you might think. But this is only the preamble of the real Aries Quest which is the story of Jason and the Argonauts. Jason’s was the son of Aeson, the King of Iolkos, who’s was overthrown by his half-brother Pelias.

Fortunately, Alcimede, Jason’s mother managed to hide the infant from Pelias. However, how long could this go on for, undetected? Alcimede decided that it was too dangerous for Jason to remain in Iolkos as no doubt, Pelias would eventually find the child and have him killed. Thus, with a heavy heart, she sent him away to be educated by Chiron, the wisest of the Centaurs.

Eventually, Jason returned to Iolcos to claim the throne as his birthright. But King Pelias was prepared. Long ago he had consulted an oracle which had warned him that one day, Jason would return. When he recognized Jason, he pretended to concede, but demanded that he must earn the thrown and so he set the young lad a challenge, which he could not resist!

Peleus demanded that Jason should bring him the Golden Fleece to prove his worthiness. Of course, Peleus was sure that this was an impossible feat and would get the boy killed without him having to do the dirty deed.

Jason took on the challenge, in an Aries sort of way, and off he went to gather his crew of brave men who were willing to join him on this impossible adventure.

Many challenges lay ahead, which would take too long to tell. here. Very nearly he failed altogether. But in the end the sorceress Medea took pity on him (or, a fancy to him?) and came to his aide. Thanks to her magic he succeeded and triumphantly he returned, not only with the Golden Fleece but also with Medea as his wife.

The story is a real hero story: here we have the unrecognized champion, who despite being born a noble, has to prove his worth and brave great challenges before he can take his rightful place. All the while the outcome is by no means certain but aided by a female ally, he eventually succeeds.

But the story continues. There is another twist. Drunk with glory, he failed to recognize those who fought by his side and helped him to succeed. In particular, he failed to recognize and honor the power of his female ally, Medea. Without her, he would never have succeeded! But with his chest full of pride he abandons her for a younger and more beautiful wife. Medea did not take kindly to being betrayed in this way and in her rage she killed their children and left Iolkos.

The lesson that the hero must learn is that while he revels in glory, no man can overcome the challenges by himself. In the end it is not HIS glory that matters, but what he is celebrated for: the fact that he was willing to face any danger to benefit his country and his family. So, paradoxically, his glory lies in his ability to sacrifice his ego, not to glorify it.

Aries is brave and courageous, but he must recognize, that he is not the only actor in the play. He must not only earn the respect of others but to keep it, he must also be careful not to step on those who helped him achieve his goals.